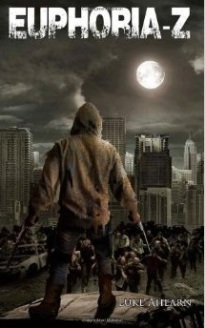 “I was born in New Orleans and moved to Monterey, CA. It was a culture shock. New Orleans bawdy and laid back doesn’t translate well here, but I survive. I have over 20 years of professional game development experience. I have also authored numerous books, ran my own computer game company for ten years, and currently I own MasterWerx Studios, an animatronic prop shop in Monterey, CA.”

“WARNING! Euphoria-Z is NOT for the timid! Within its pages are depictions of adult situations, violence, gore, nudity, and the use of profanity. Civilization shuts down as the world’s population fills the streets in a deadly orgy. They feel only pleasure and never pain, even as they are injured, maimed, and mutilated. The few who remain unaffected struggle to survive, unaware that things are about to get unbelievably worse. Cooper is among the few survivors of a conspiracy to depopulate the world. One week ago, college was his biggest concern. Now he is on a perilous journey to find his sister. But zombies aren’t the only threat he faces. In this nightmarish reality, the living can be far more dangerous.”

While this was longer than a normal thriller, maybe longer than it needed to be, it was still a lot of fun and as realistic as a zombie book can get. Despite the description, I wouldn’t consider this any more graphic than the typical apocalyptic tale.

The gritty and far-from-perfect heroes are a breath of fresh air in this genre. Don’t expect some super warrior with a heart of gold to step in and save the day. You’ve got pop-culture obsessed, entitled kids and wannabe thugs trying to survive the end of the world. If you’re tired of zombie hordes, rest assured they’re merely a backdrop. Not the real threat. This story is all about rebuilding and the struggle among the survivors. Without giving anything away, the fighting is not random.

My only real complaint is the length. Euphoria borders on being an epic saga. There’s so much action and conspiring in here that I’d expect a 2 or 3 book series.

Still, a fun, ultra-modern ride and more than just escapist literature. Definitely worth adding to your To Read list.