The Games by Izai Amorim

The Games by Izai Amorim 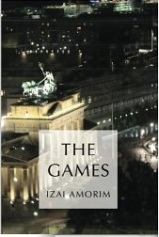 “Izai Amorim was born and raised in Brazil but spent most of his adult life abroad, briefly in the USA, mostly in Germany. He was trained as an architect and worked many years in the profession. But his real passion is story telling. At some point in his life he decided to mix storytelling with architecture, changed profession, and became a branding consultant, something that he loves and has been doing to these days. He writes about media, information, and politics. His first novel The Games shows how information is processed to create and spread the stories needed to establish power structures not accountable to anyone. The graphic companion to this novel is the photographic essay The Lace Curtains of Berlin.”

“The Games is a mean political novel. Not for people who expect the good guys to win at the end: there are no good guys in it. It’s rather a battle of evil against evil. This mother of all conspiracies will take you to the world of terrorism without a cause; environmental protection organizations operating extortion rackets; secret services run amok; global television networks manipulating the news; major sport events being hijacked by politicians and profiteers; and last but not least the world of lace curtains and their political meaning to former terrorists on parole.”

On page 1 you’re led to believe this is a thriller about stopping nuclear terrorism. As you go along, the bomb has little to do with the story. This book is packed with satire, social commentary and dark humor, but relatively little action. But that’s alright, since the background story to the attack sucked me in. This whole story strikes me as literary fiction merely masquerading as a thriller!

Another unique point: almost the entire tale is told in the present tense. I thought that would get boring after a while, but not really. It helps keep the story fresh.

The only real weakness is it’s a little dated. That’s important because the “hopelessness” of rehabilitating East Germany plays such a crucial role in the story. What was true once has changed in the last decade.

Still, that doesn’t detract from the story. This is a well-written and fun book, as well as a cutting commentary of European social politics and big business in general. An enjoyable, unique read.