Review of 3 YEARS AFTER… by G. R. Mountjoy

3 Years After… (A Military and Zombie Apocalypse Series) by G. R. Mountjoy 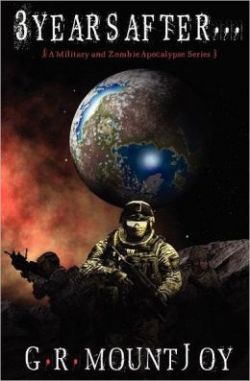 “G.R. Mountjoy was born in Indianapolis, IN in 1974. He went to the Franklin Central High School and Graduated in 1993. Upon graduation he enlisted in the United States Army, and was stationed at Fort Bragg N.C. as a member of the Scout Platoon in 1/504 PIR. He spent 14 years in the Army with various assignments that included the Infantry, Aviation, and Recruiting. He has been stationed in Georgia, New York, North Carolina, South Korea, and on the island of Great Exhuma Bahamas. He medically retired from a simple kidney stone surgery gone bad. His interests include science fiction reading, movies, golf, and sports. He is an avid sports fan, loves the Chicago Cubs, Notre Dame Fighting Irish, Indiana Hoosiers, Indianapolis Colts, and Alabama Crimson Tide. He is married to his wife and has a daughter with another child on the way.”

“3 Years After” is a story about a Special Forces team put together to help our nation in a most fragile time. The post 9/11 world has forced the United States government to develop new ways to fight and counter terrorism. During the initial testing of the latest technological breakthrough, Time Travel, a catastrophic failure occurs. This strands the test team three years into the future. They are greeted by a new world which has been decimated by war and infested by zombies.

Will the team and humanity survive?

Do they figure out what happened in time?

This is the new version that has been edited.”

Mr. Mountjoy really tries to give the reader everything at once: zombies, time travel, a commando story and post-apocalyptic world rebuilding. He comes agonizingly close to pulling it all off. With a bit more detail- the book is too short- this might have been an instant cult classic.

A mixed team of different high speed operators are assembled for a “secret project” that lands them 3 years into the future… just after the zombie apocalypse. They spend surprisingly little time worrying about that, shrug their shoulders and set off on a mission across the country to link up with the remnants of the US Government. Along the way they slaughter zombies by z-bucket full, of course. Where it gets really interesting is how they unite various bandit and survivor groups and inspire hope in the pockets of the scattered human resistance. A fun improvement to the simple survival tale.

What’s disappointing is that you never feel the warriors are in real danger. They’re armed to the teeth, are always conveniently given excellent intel ahead of trouble and are just way too lucky.

Now, the action is incredibly fast paced and does flow quite naturally, but when that speed is combined with the lack of real stress for the heroes I just couldn’t get really excited or emotionally invested. That said, the author’s character dialogue is spectacular. Earthy and real, without being over-the-top macho. I bet they’ll remind you closely of people you know.

All in all, an entertaining read. The flaws are not deal breakers; this book is worth the time. This book is one heck of a teaser for the rest of the series. I’ll most definitely read the next one.